Another successful homecoming at LAU 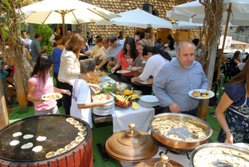 LAU’s 2011 homecoming season was a smashing success, with hundreds of graduates returning to take part in the festivities. Throughout the middle of July, LAU hosted several events for its extended family, on campus and throughout the country. Homecoming in July also gave LAU alumni a chance to see how far their community has gone, through a film screening and a public awards ceremony for successful members of the alumni community.

This year’s alumni events kicked off on July 13th, with about 350 alumni attending the dinner at the Phoenicia InterContinental Hotel in Beirut. During the dinner, LAU staff, including alumni relations director Abdallah Al Khal, thanked chapter members worldwide for their efforts in raising money and awareness for the university.

Hundreds of Byblos and Beirut students also took part in their own reunions on the 14th and 15th, respectively. In Byblos, former students also got the chance to see the new Frem Center, as well as take in a screening of Teta Alf Marra, a well-received feature film written and directed by alumnus Mahmoud Kaabour. The rest of the week was marked by well-regarded trips to attractions throughout Lebanon and a meeting between President Jabbra, and a group of alumnae celebrating the 50th anniversary of their commencement.
LAU also awarded alumna Rima Hourani with the annual recognition award, and Ricardo Karam with the annual achievement award.
You can read more about the events and view photos here.