After months of planning, Lebanese American University hosted its first gala in New York on April 30th, raising awareness and resources as part of its comprehensive campaign. LAU has taken part in a variety of galas and other events throughout the Middle East, catering to alumni and friends of the university, but the April event marks the first gala for the North American audience.

In addition to attracting new donors and friends for the university, the event also honored two Lebanese diplomats for their service to their country. Antoine Chedid is Lebanon’s ambassador to the U.S., arriving in Washington after serving throughout the world as a diplomat and aide in the Lebanese Foreign Service. The gala also invited Nawaf Salam, Beirut’s ambassador to the United Nations. Ambassador Salam is also known as a writer and editor on works involving legal and political issues since his time in institutions of higher education. The event was hosted by Jeanine Pirro, a long-serving politician and public servant in New York State, who is also of Lebanese descent. 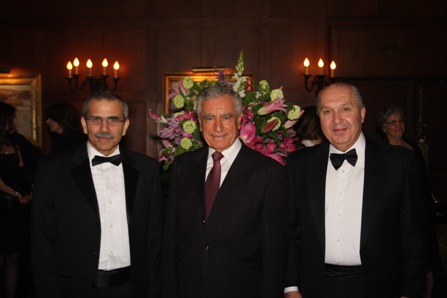 Lebanese Ambassador to the United Nations Nawaf Salam (left), LAU President , and Lebanese Ambassador to the United States Antoine Chedid at LAU’s inaugural gala in New York City last month
The gala also benefited from the support of many of the university’s closest friends, including alumni, prominent donors and members of LAU’s governing boards. The university also benefited from raising a considerable amount of money from the event, much of which will be earmarked for a new endowment in the name of Sarah Huntington Smith, the 19th century founder of the girl’s school in Beirut that was the precursor of LAU. The endowment will be used to help fulfill the educational needs of women in the Middle East.
The university’s supporters purchased over 20 tables, and many also offered in-kind donations to make the event a success. Though organizers in LAU’s New York office hoped for at least a hundred guests, over 260 came to the event, filling the venue to capacity.