Lebanese American University has gone through a visual transformation, with a new logo, a new seal and a new method of establishing itself in the marketplace. In addition, the university has been in the midst of its comprehensive campaign, which has required the publication of a variety of pamphlets with information about the university for potential donors and constituents. The last two years have also seen a change in the flagship LAU Magazine & Alumni Bulletin, after painstaking design work, writing and editing. All of these changes and additions rely on the work performed by the Marketing and Communications team.

The team is led by Peggy Hanna, the assistant vice president in charge of the office. Peggy comes with a background working for NGOs and the public sector. Peggy’s career has been focused on working for organizations with globally important missions, like the World Health Organization and UNICEF. Rasha Accad, an LAU alumna, has been a project coordinator since joining in 2007. As part of that role, she has been involved in planning major events and managing the budget and strategy of the office.

Peggy’s team is equally well-traveled, with team members coming from all over the world. Saba Fatima Haider, who is in charge of print publications for the office, is originally from Canada. She has also studied in Britain and worked as a writer and editor in the U.S. before coming to LAU. In addition to her print duties, Saba works with Nanor Karageozian to collect and publish stories about events on campus on the university Web site’s news section. Nanor also writes and edits online content for other parts of the website. 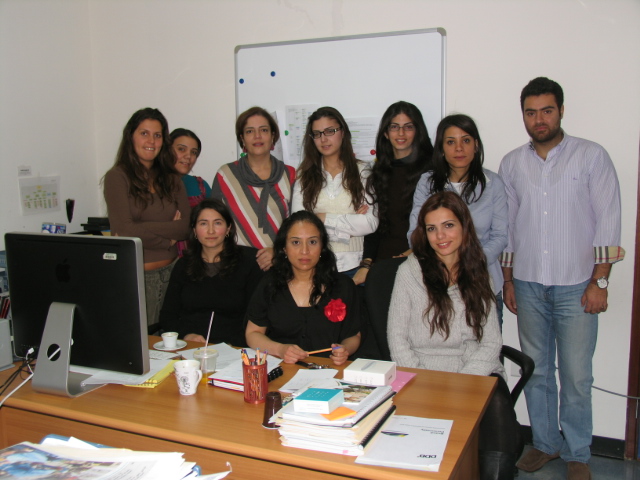 Olga Habre was also involved with LAU Magazine, writing and editing some of the articles that go into every quarterly issue. Her knowledge of campus events also helped her work with the managing editor of the magazine, Todd Dorman. Olga joined after earning degrees in teaching and spending three years teaching English as a foreign language. Olga also came to Lebanon after spending time in the U.S., Russia and France. After helping make LAU Magazine a success, Olga is leaving LAU’s MarCom team in May for new challenges.
In addition to printed publications, MarCom is heavily involved in managing the university’s online presence. Karina Rodriguez, an associate director in the office, works with Karim Maknieh and the rest of the web team to produce and update new and existing university websites, from the homepage for the entire LAU community to school and institute pages. Karina has been involved in creating LAU’s online presence since she was a student, building the university’s first homepage in 1997.
Once the office produces the university’s content, it relies on Sawsan Bistanji to measure its impact on the community. Sawsan, who joined in 2008, performs research by arranging interviews and focus group testing, and using the results from that testing to provide recommendations on the future direction of the university’s message. Sawsan earned those skills by studying at AUB and LAU, and also has years of experience marketing pharmaceuticals in Lebanon.