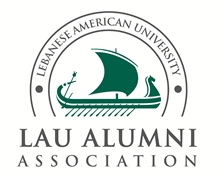 After over a year of careful study and surveying the LAU Alumni Association recently announced a new logo that is designed to stand on its own and reflect the image and strength of the Association while also being able to act as a compliment to the university logo.
Based on an extensive survey of various groups of alumni conducted by the Alumni Relations office last year, the new logo had the broadest appeal. The consensus among a wide swath of alumni being that the logo reflected, among other qualities, a seriousness and sense of belonging—qualities they found of particular importance for their alma mater. The colors of the logo were also thoughtfully chosen as both gray and green reflect life and growth.
The process of creating a new logo involved more than half a dozen designers with different perspectives and approaches yielding numerous designs that were then viewed, studied and amended by the focus group that included individual alumni as well as alumni chapter officials. Then the logo was presented to members of LAU’s administration who offered their own amendments before it gained final approval.

In addition to being able to be used as a compliment to the official LAU logo, the LAU Alumni Association logo is also designed to accommodate the addition of an alumni chapter name. This property will allow it to become both a personalized logo for each alumni chapter as well as a ubiquitous symbol of LAU’s growing global alumni network.