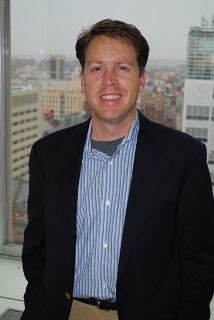 Mr. Todd Dorman was managing editor of LAU Magazine for the last year and a half. During that time he worked with members of LAU’s Marketing and Communications teams in both Lebanon and New York to energize the publication for the university. He’s spent much of the last couple of decades consulting on communications-related issues for various organizations.
We caught up with him to discussed his work with LAU and his vision of the future of communications.
You had been working as the managing editor of LAU Magazine since 2008 and since that time the magazine underwent a lot of changes.  Tell us a little bit about how the publication was transformed during your tenure.

It was hundreds of little things, but the two major changes were, first of all, shifting to a quarterly publication schedule that was actually deadline-based, and required a kind of reset for how a lot of staff/faculty thought about the magazine, and second, shifting from an "all LAU all the time" coverage mentality to a general focus magazine. That kind of sounds simple, but it meant that instead of being event/project based in our reportage, we could basically cover anything that LAU could supply expert commentary on. That’s obviously a long list, so it really opened up the potential for the magazine.


You’ve also helped out the university with the development of a couple of new online publications.  Do you see the future of communications shifting completely online in the near future?

It’s a popular sentiment, and you don’t see a lot of newspapers in science fiction movies. At the same time, it’s easy to sit in front of a laptop that’s wirelessly connected to a T-1 line and write print off the planet.
For LAU, which is definitely developing a more global focus, it’s important to remember that online communications don’t permeate the globe yet. My guess is it’s going to take longer than everyone thinks. And there are certain types of communication that people still want in print. Generally speaking, I think crucial publications and what people think of as important communications will retain a print element for a long time. Have you ever been to a paperless property closing? The reading experience is also different on/off line, and I think most of the people who write about this stuff tend to be techno-advocates. I don’t see print ever disappearing entirely. I may be wrong.


Tell us a bit about the importance of messaging and consistency in communications.

Not enough space to answer that one! Consistency of vision is critical, and there are a few moments in a communications campaign that are either do or die. I think the key is recognizing the opportunities when they come—as well as capitalizing on the ones you create yourself before launch. Some of them you plan and some of them you don’t. Obviously having a team that gets the vision is key as well, otherwise those opportunities just sail by while you’re in the conference room.


Your tenure as managing editor of LAU Magazine has ended but your relationship with LAU hasn’t.  What do you have on the horizon, both with LAU or otherwise?

LAU is doing a lot of great and innovative new things with their communications right now and I suspect I’ll partner with them on some of these upcoming projects. Other than that I’ll continue to work with my other for and non-profit clients in various fields—and try to keep up with my yard work!


So you’re a musician, right?  Tell us a bit about your musical past?

Lots of time in vans! I played in bands from about 14, and started writing and recording original music way back in college in California, with this weird, funky band called Rhythm Akimbo. I’ve done it full time and for fun, but these days I’m basically in a band with my two sons. Lots of drum circle stuff, and chant, and blues—songs about dinosaurs, trains, and various Pixar characters. Hopefully the neighbors won’t complain once we turn the amplifiers on!
Share
Share