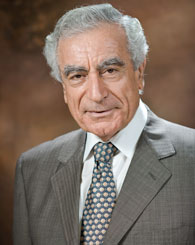 Join us on Friday, February 10 at 5pm (Lebanon Time) for a special one-hour live chat with the president of LAU, Dr. Joseph G. Jabbra.

Dr. Jabbra assumed the presidency of LAU on August 1, 2004. His leadership has launched LAU on a path of institutional and academic renaissance. During his tenure as president, Dr. Jabbra has overseen the university’s accreditation from the New England Association of Schools and Colleges (NEASC), the implementation and successful completion of LAU’s first comprehensive capital campaign “The Legacy and the Promise,” and the opening of new schools and the development new programs at the university.

Dr. Jabbra earned his law degree at the Université Saint-Joseph in Beirut, and a Ph.D. in Political Science from the Catholic University of America in Washington, D.C.

He is the author, co-author, and co-editor of 12 books, including his latest book Public Administration in Transition. He has also published over 33 articles and chapters in books and scholarly journals, over 26 book reviews in both English and French, and scores of scholarly papers and keynote addresses given at learned societies’ meetings and professional gatherings.