Charles Elachi is the director of NASA’s Jet Propulsion Laboratory, which is responsible for developing and launching robotic tools that help the U.S. explore the solar system. In addition to launching probes and operating telescopes to look outward, Elachi and his colleagues at JPL are also using their expertise to explore Earth, using probes to monitor the effects of everything from global warming and earthquakes. In addition to his responibilities at NASA, Elachi is also the chairman of LAU’s Board of Trustees. Elachi also has a long career of education, attending schools in France, Lebanon and America before teaching planetary science himself. We asked Dr. Elachi about the future of space exploration, education and his homeland. 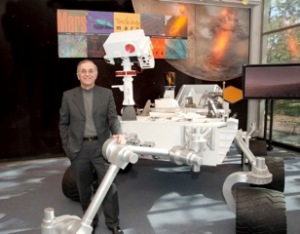 Since becoming the chairman of the Board of Trustees, what do you think of LAU and its students?  How long have you been involved with the university?

LAU is a young vibrant old university.  What I mean by that is that despite its long history (founded in the first half of the 19th century, as a women’s school) LAU keep reinventing itself to stay at the forefront in educating the next generation of leaders in Lebanon and the Middle East.  Under Joe Jabbra’s leadership, LAU recently received accreditation putting it on par with academic institutions in the U.S.
When I met with some faculty and students on my last visit (March 2010), as well as previous visits, I was very impressed with the enthusiasm, dedication and “family” feeling at LAU, as well as the harmony between students who came from a very diverse background that is the fabric of Lebanon and the Middle East.
Having been educated through the French system in Lebanon and France before I moved to the U.S., I was not familiar with LAU.  However, since I joined the board in 2006 and became chairman in 2009, I got to know a lot about LAU and its vision, staff, faculty and students.  I am very impressed and delighted to be associated with such an institution.
From your vantage point in America, what do you think of the future for Lebanon and the Middle East?

I believe Lebanon and the Middle East have great assets in their young people who carry the legacy of a region which use to be the “intellectual center” of civilization.  However, the economic, social, and political systems need to undertake significant change to provide the next generation the opportunity to lead the region into the 21st century.  This will require an environment where young women and men have the freedom of thought, expression, and belief, to work in harmony ­­­irrelevant of ethnic, religious, or geographic background and that the political and industry leaders invest to provide opportunities for employment and development.  There is no reason why the young people in the Middle East cannot achieve the same level of economic and intellectual leadership as anywhere in the world.
For those unfamiliar with the Jet Propulsion Laboratory, what is its mission?
The Jet Propulsion Laboratory (known worldwide as JPL) is the leading center in the U.S. for robotic exploration of our solar system and the Universe.  JPL has led the development of almost all the U.S. missions that went beyond Earth orbit to explore the planets.  JPL built the first American S/C Explorer 1 in 1959.  JPL spacecraft have visited every planet in our solar system.  As we speak today, we have nineteen S/C as our exploration ­­ emissaries across the solar system.  They include the two Voyagers that are leaving our solar systems to explore the interstellar medium, Cassini that studies the Saturnian system, two orbiters around Mars, two rovers (Spirit and Opportunity) on the surface of Mars, Dawn that is heading to encounter Vesta and Ceres (the two largest asteroids), EPOXI that will encounter Comet Hartley-2 in November, a number of Telescopes in the visible, IR and UV, imaging galaxies across the Universe, and a number of Earth orbiting missions monitoring the global change happening on our planet.
This work is done by 5000 scientist and engineers that are some of the best and brightest “explorers” in the U.S.  In addition, most of our missions involve U.S. industry and universities as well as many international space agencies (EU, France, Germany, Italy, England, Japan, India, Russia, Argentina, etc.).
As the director of JPL, you are a part of an American space program that undergoing fundamental changes.  Where do you see yourself and your agency in five or ten years?
The sign of a visionary institution is to not be afraid of changes as we live in a very dynamic technological world.  Therefore, we look at change as an opportunity to move forward more boldly.  In the next decade, we will have permanent robotic stations and rovers on Mars accessible (remotely) to researchers on Earth.  We will be exploring the presence of life friendly environments on Mars, Europa, Titan, and Enceladus.  We will be taking “family portraits” of the planets around the neighboring few thousand stars and determining if they are Earth like planets.  We will have a network of satellites monitoring the environment of our planet with their data accessible worldwide so policy makers can make informed decisions about how to manage our environment.  In addition, we will have humans who are starting to venture beyond the Space Station and Earth orbit preparing for future travel to Mars.
In a nutshell, the future of exploration, in all fields, for the young generation of today, is as exciting as what my generation has accomplished.
What do you think of the state of science education at universities today?
The state of science education at universities in the U.S. and Europe and to some extent, at some universities in the Middle East and Lebanon, is very forward looking.  My biggest concern is the state of science education at the middle school and high school level, because it is at that age that young people decide on what career they want to pursue.   I believe that the nations, which invest in the education (particularly scientific education) of their youth, are the ones, which are going to become the economic leaders of the future.
Share
Share