Taline Al Assad was a student in International Affairs and Political Science with an emphasis on International Economics and Economic Development at LAU.  She recently graduated with dist 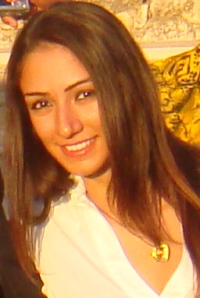 inction. Taline loves to travel; throughout her years at LAU, she has had the chance to attend the Harvard World Model United Nations in Holland and Taiwan, and took part in the International Institute for Political and Economic Studies (IIPES) by Georgetown University in Greece. Fluent in Arabic, French and English Taline also learned to speak Armenian from her mother and Greek from her father and studied Spanish for a year. Taline also participated as an election monitor during the recent municipal elections in Lebanon. We asked her a few questions about her experiences as a monitor.

So tell us about your experience monitoring the recent municipal elections in Lebanon with LADE. What was the training like and what did you do during the monitoring process?
I participated in two workshops by LADE in LAU, and a general meeting in Metn (that’s where I was monitoring the elections), where I was introduced to the association, the process of the municipality elections in Lebanon, and the general rules and procedures. The most interesting thing LADE taught us during the workshop is to “think like cheaters”, that way it would be easier for us to spot anyone trying to break the law inside the electoral room, or outside the schools where elections were taking place.
During the monitoring process, about every couple of hours, I was supposed to send text messages to LADE informing them about any violations in my area. I had two other monitors with me, and we made a great team covering all areas in the school in which we were assigned.
The monitoring process is designed to enhance transparency in Lebanon’s electoral process. How successful do you think the process has been?
During Election Day, I found that the monitoring process, at least in my area, was successful in enhancing transparency in Lebanon’s electoral process because when people saw the blue LADE jacket I was wearing, and especially in the electoral room, they tried to avoid even the slightest violations, because they knew I was going to automatically report them.
As for the post-election phase, I was disappointment when I heard some politicians speak out against LADE’s reports claiming the association was taking sides, because I was there during Election Day and I know for a fact that this allegation is not true. Therefore, I hope that comments such as these, from whatever side they came from, will not influence people’s views concerning what’s really going on in Lebanese elections. Instead, I advise people to try to listen to an objective approach by a young group of people who are working for one cause, which is the Lebanese one.
In your opinion how strong is the democratic process and civil society in Lebanon and what do you think needs to be done to make things even better?
I don’t think Lebanon is the worst country when it comes to democratic elections, however, a good amount of work remains to be done. Electoral reforms are indeed needed such as lowering the voting age to 18 and introducing gender quotas. Public awareness campaigns are also significant in educating the people about the importance of true transparent elections away from corruption, family feuds and bribes.
When it comes to municipality elections, what Lebanese people should care about is a good electoral program aiming at enhancing people’s towns and cities, not just families feuding about who will come to power. For example my family and I live in Metn but we are originally from the north, and nobody from our building votes in Metn. As a result, our municipality never bothers taking care of us; we have the worst road leading to our building in the entire town of Ain Nejm, while the “native” population enjoys the best privileges. That is because people running for the elections care about the votes and not what should be really done to our town. It is for that reason that I think introducing electoral reforms (such as making people vote in their region in the case of municipality elections) is vital.
How important a role do you think university students and young people play in the political future of Lebanon and what do you think the future holds?
The role of the youth is extremely crucial today. We are the young post-war generation of Lebanese and I think we can really learn and change many of the mistakes made by the previous generation. Unfortunately, political leaders can easily influence young people, and as long as Lebanese society remains as sectarian as it is today, there is little chance for improvement.
I also see a brighter future in the political future of Lebanon when young people are given their voting rights. When current politicians attempt to mobilize the youth the way they currently do, the least they can do is give them their basic right to vote.
Congratulations on just graduating from LAU! What are you plans for the future?
I am currently interning at the Ministry of Foreign Affairs for the summer. I also plan on travelling and gaining some experience this upcoming year before I start my master’s degree by the following fall. My long-term plans include obtaining a PhD and working for the United Nations or the European Union in the area of Development.
Share
Share