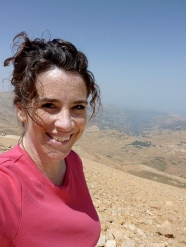 Kelly Blatner Humiston was one of over 150 students who attended this year’s Summer Institute for Intensive Arabic Language and Culture (SINARC), a program that gives participants a real glimpse of the Arabic language and the Arab world up-close. Although LAU has held this program for many years, the last few have seen a period of tremendous growth, as more Americans and others throughout the world become interested in learning Arabic. SINARC offers them a unique opportunity to learn more about the region directly, while experiencing its cultural sensibilities firsthand.

Kelly spoke with us recently about her experiences.

So how long have you been studying Arabic and why did you decided to participate in SINARC this year?
I have an Master’s degree in Arabic Literature and Linguistics from Georgetown, but it’s been several years since I graduated.  After graduation I started a family and drifted away from Arabic, so earlier this year I began looking for a summer Arabic program, preferably abroad, where I could get back up to speed and revive the language skills I’d lost.  A Google search for "summer Arabic programs" turned up many responses but SINARC immediately caught my eye because it was in Lebanon.  Middle Eastern politics has been an interest of mine since the early 90s and Lebanon was the country I wanted to visit the most if the opportunity ever arose.  After reading over the information on the SINARC website about the classes offered and the instructors it seemed like the perfect program for my needs, so I applied.
What did you like most about the SINARC program and what surprised you most about the program?
What I liked most about the program were the instructors.   And from what I could tell, most if not all of the students would also say they really liked their teacher.  I think it was the nurturing atmosphere the teachers created, the smiles on their faces, and the way they enjoyed the students and looked after them.  Going to class each day was like being part of a big family. Even the teachers I didn’t have a class with were friendly and said hi to me everyday.  I felt like I could walk up to any one of them and ask a question about Arabic and they would be happy to help me.
What surprised me most was the very reasonable cost of the SINARC program and all the sight-seeing excursions that come with it, compared to the higher cost of most summer Arabic programs in the United States.  And when you factor in how students get a total immersion experience in Lebanon for less money than a non-immersion or partial immersion experience in the United States, it becomes an even better deal.
Is there anything that you would have changed about the program if you could have?
One of the best parts of the SINARC program is the weekend excursions.  Lebanon is blessed with many historical sights featuring ruins from ancient times as well as places of beauty that range from the Mediterranean Sea to the Mount Lebanon area, Jeita Grotto, and the Cedars.  There is so much to see, and they wanted us to see it all.  While that was a good thing, there were occasions when there wasn’t enough time to fully appreciate some of the sights.  I would suggest turning more of the day excursions into overnight trips, or adding a few days to the program length to allow students a better chance to soak in the sights.

Have you been to Lebanon before or was this your first time? What was your impression of the region?
This was my first trip, and it exceeded both my hopes and my expectations.  My impressions before arriving were largely shaped by the stories about Beirut and southern Lebanon in the American media and by the strong language in the U.S. State Department travel warning.  I expected to see a city that was war-torn and a bit lawless; a place where political tensions were high and the people didn’t really like Americans.  What I found was a pleasant surprise.  Beirut is a vibrant, welcoming city.  And the Lebanese, who highly value family and relationships, love to socialize and celebrate.  I received several invitations to join various festivities and quickly learned that the Lebanese are welcoming of Americans who genuinely care and want to learn about them.  Political tensions do exist, both internally and with Lebanon’s neighbors, but that was not something I felt on a daily basis.  The biggest impression I was left with was feeling that the diversity of Lebanon is something to be treasured.  Druze, Christians, and Muslims from the city and from the village work together at LAU, and as students we met people from the various confessions and regions of Lebanon in the restaurants, cabs, and shops around Beirut, even just on Hamra Street!  I can’t wait to go back and see the new friends I’ve made and see the country that is rising so beautifully from an embattled past to a hopeful future.
Where do your Arabic studies go from here? Are you planning to continue to build your skills?
I definitely plan to continue to study Arabic!  An important feature of the SINARC program for me was the chance to learn the Lebanese dialect in addition to Modern Standard Arabic (MSA).  Better yet, there was also the option to study Lebanese dialect as the main class, instead of MSA.  I chose to do that, and it was my first exposure to any Arabic dialect in depth.  My teacher, Wafa Kays, has taught Lebanese dialect for years and also wrote the textbook we used.  As I told her at the end of our six weeks together, her enthusiasm in the classroom and her love for her students were big factors in making the SINARC experience fun and enjoyable for me, as well as inspiring me to continue to build on the dialect skills she introduced.  I hope those skills, along with my proficiency in MSA, will one day lead to a job that I love, a job where I get to work closely with people, maybe refugees or maybe Arabic speaking children who want to learn English.  Whatever it is, I hope it’s a job that allows me to spend lots of time in Lebanon.
Share
Share