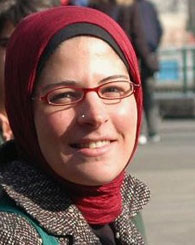 Join us on Tuesday, November 22nd at 6pm (Lebanon Time) for a live chat with Prof. Yasmine Dabbous, assistant professor of journalism and media studies, and the director of The Institute for Media Training and Research at LAU.

Dr. Dabbous recently conducted a study survey of 400 university students about the January 25 revolt in Egypt. The survey examines media consumption patterns among the study population and the effect of these patterns on students’ perception of the revolt in terms of framing and narrative construction. It studies whether exposure to different media types and media organizations within the same type affects the way students viewed the events. The study also examines whether social identity patterns mediate the results in question.

Documenting the effect of the first fully-mediated revolution in an environment where media production and consumption patterns are changing constantly, the study revealed three different frames of the event –mainly mediated by social identification: the social, the religious and the media-related. It also suggested a relationship between the first and those who watched Arab news channels and the last and those who followed the news on YouTube.

What do you think? Does the media change how we perceive an event? Ask your question to Prof. Dabbous!