On the evening of Saturday, May 22nd LAU President Dr. Joseph Jabbra hosted the university’s annual dinner to honor the Lebanese media community during an event at the Phoenicia Hotel in Beirut. Over two hundred guests, most of them members of the broadcast and print news media throughout Lebanon, attended the reception and dinner event.

LAU’s Director of University Relations Christian Oussi, along with other members of the university’s media outreach team, including Bert Makadessi, Nada Torbey, and Greg Houle, were on hand to greet the guests and members of LAU’s administration. The communications team was also joined by members of the faculty.
At the start of the event, Oussi asked for a moment of silence for Melhem Karam, a journalist who also served as the head of the Lebanese Journalist Union for the past half-century. His long tenure as head of the union made him the practical dean of Lebanese journalism, with his death earlier that day marking the end of a long era. Dr. Jabbra spoke about LAU’s recent accomplishments, promising that the university would “continue to be a beacon of scientific, literary, and intellectual achievement” for future generations and provide Lebanon and the region with highly trained individuals who would serve their communities. 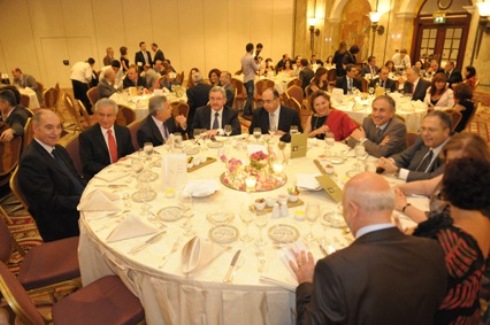 Dr. Jabbra meets journalists during the dinner
The group of journalists, staff and faculty was also joined by a member of the Lebanese national government. Terek Mitri, the information minister, also spoke at the event, and invited those in the audience “to think, discuss, and work together to defend the rights of those in the media profession.” He went on to stress the need for journalists “to organize their profession and strengthen their societal and professional support. And more importantly, defend their freedom.”