With new seminars, Alumni Relations Office is educating the mind and body after graduation

LAU’s students have always devoted themselves to learning during their time on campus, but that devotion can continue after alumni leave campus for the next stages of their lives. This is thanks to a new initiative of the Alumni Relations Office to hold a series of lectures for alumni that are focused on important, timely and intriguing subjects.

The first of the three planned lectures focused on reiki, a Japanese form of alternative medicine that naturally uses the body’s channels of energy to improve health. More than 100 alumni and friends attended the first event in Beirut in early November, which was presented by pharmacist and reiki practicioner Farida Khizam. Khizam focused on the principles and potential uses of the practice for the alumni who attended, and also participated in a question and answer session after the end of her presentation. 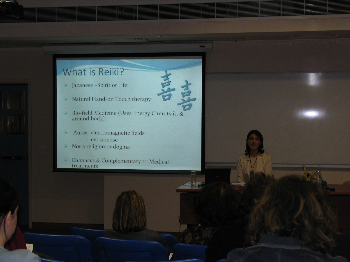 As part of its effort to educate outside of the classroom, the Alumni Relations Office is also catering to the mind as well as the body. Alumni will soon be able to attend a lecture presented by two of LAU’s professors, Drs. Michel Chalhoub and Ahmad Oueini, on the subject of emotional intelligence. Regardless of the subject, the lectures will provide great value to those who attend. “Such lectures are a sort of an informal reunion where alumni can see old faces, schmooze, catch up, and network while engaging in an energizing and intellectually stimulating activity,” Oueini explained. “It’s also a great way for the presenters to reunite with their old students.”

The office is also sponsoring an event to honor Dr. Fouad Rifka, a poet and writer who also taught at LAU for over 30 years. The event will give alumni a chance to reconnect with one of their professors, while giving LAU a chance to show its cultural sensibilities to the world. Those who attend the event will be able to hear some of the poems featured in Rifka’s latest book.