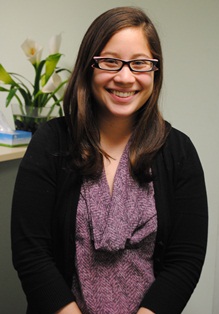 California native Maryam Zoma joined LAU’s New York team last month as a development associate. Maryam, who is of Iraqi heritage, is a 2010 graduate of Fordham University in New York City where she received a Bachelor of Arts degree in Middle East Studies and Political Science. In 2008 she spent a semester studying abroad at the American University in Cairo.

After graduation Maryam was planning to attend law school but just days before she was about to accept a place at the Case Western Reserve University School of Law  she received word that she had been awarded the prestigious Fulbright Scholarship. For the next thirteen months, from August 2010 until September 2011, Maryam lived in Amman, Jordan conducting research on the ways in which faith-based organizations are improving the psycho-social well-being of Iraqi widow refugees.

Given her Chaldean-Iraqi family heritage and her extensive experience living and traveling in the Middle East, Maryam was eager to join an organization like LAU with such a long history serving the Arab world. And if you happen to visit the New York office she’d be happy to make you some of her world famous fattoush.