On the evening of March 24th, in conjunction with LAU’s Board of Trustees meeting in Washington, DC, the university hosted a unique event. Dubbed “The LAU Panel” the event brought together three journalists—Zeina Awad from Al-Jazeera, Max Fisher from The Atlantic and Jackson Diehl from the Washington Post—along with moderator Graeme Bannerman who represented the university in the US capital. For one hour the journalists and Dr. Bannerman engaged in a spirited and engaging discussion about the unprecedented popular uprisings that have spread throughout the Middle East and North Africa over the first few months of 2011. 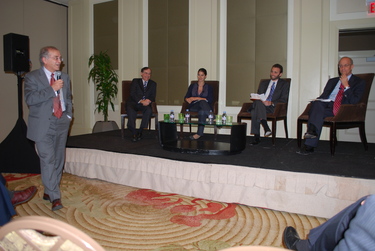 After a brief introduction by BOT Chairman Dr. Charles Elachi, Bannerman laid out the important role that each media outlet represented on the panel has played during the current uprisings. Then Diehl, Fisher and Awad each had an opportunity to give their own thoughts about the uprisings and some of their feelings about the role that the media has played and will continue to play going forward. For the next thirty five minutes the panel took questions from an eager and informed audience made up of members of the board, alumni, friends and employees of LAU.

remarks comparing and contrasting the largely successful anti-Soviet revolutions that swept across Eastern Europe in the late 1980s and the mostly unsuccessful popular uprisings in Europe in 1848. “It’s too early for us to tell,” he said.

Fisher focused his remarks on the role that the media—both the traditional media and new media such as Facebook and Twitter—have played in the uprisings. He pointed out the proclivity of the American

news media to paint the Middle East in black and white colors without taking the time to dig deeper.
Awad, who is of Lebanese descent and spoke of the great pride she takes in institutions like LAU,
mentioned that “this is the first time in our history that Arabs are listening to each other instead of being told what to do by their governments.” She also went on to note that her network, Al-Jazeera, has largely become ingrained within the growing revolution.
The event was conceived as a way to position LAU as an institution at the forefront of current events and knowledge, and as an opportunity to introduce a new audience to the university. Given the positive reception by the audience and the professionalism of the panel the university expects to continue to develop this series further and produce similar events in the future.