Last month thousands of alumni and other guests, including dignitaries from the realms of politics and business, attended two overwhelmingly successful gala dinner events in Abu Dhabi and Dubai.
The Abu Dhabi alumni chapter celebrated its 19th annual gala at the Rotana Beach Hotel with over 650 alumni and friends of the university in attendance—the largest gathering that the chapter has seen in the nearly two-decade history of the event. “From LAU to the World” was this year’s theme which honored four prominent personalities in Abu Dhabi and the Arab world, each of whom is a vehement supporter of LAU: Mr. Amal Hourani, Mr. Kameel Sarieddine, Mr. Salim Zyr, and Mr. Salim Sfeir.  Additionally, the Bank of Beirut was the major sponsor at both the Abu Dhabi and Dubai events. 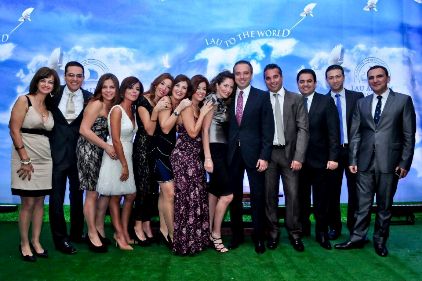 The major highlight of the evening was the surprise and unannounced honoring of President Jabbra for his excellent leadership of LAU and for lifting the university to greater heights than it has ever reached. During the ceremony, chapter president Naim Stephan asked the committee members to join him on stage and then called on Dr. Jabbra to be handed the unexpected award.
The entertainers for the evening were Lebanese violinist Hanin and well-known Lebanese singer Wael Jassar, both of whom were flown in from Lebanon especially for the event.
The following day the Dubai alumni chapter held its annual gala dinner at Al Bustan Rotana Hotel with more than 550 alumni and friends in attendance. The highlight of the event was the honoring of H.E. Leila Solh Hamadeh, former Minister of Industry in the Lebanese government and Vice President of Alwaleed Bin Talal Humanitarian Foundation, for her generous contribution to Lebanese civic society and to LAU. Several scholarships to help needy and deserving students at LAU were raised during the dinner.
Lebanese singers Maya Diab and Joseph Attieh were flown into Dubai to provide the evening’s entertainment.
"I attended both events with great pleasure and enjoyed witnessing the great work our alumni have put on," said Abdallah Al Khal, LAU’s Executive Director of Alumni Relations. "It takes professional event planners to put together such grand and extremely well organized gala dinners but our alumni proved that their dedication to LAU was their drive to two most succesful dinners.It is indeed a priviledge working with each and everyone of them."

A total of $550,000 was raised at the two events combined, all of which will be used to support student scholarships at LAU.