LAU joins the global discussion on education and collaboration

As part of its effort to enhance its reputation and build connections with other universities around the world, LAU will take part in the upcoming conferences of the Middle East Studies Association (MESA) and NAFSA, the association for international educators, this and next year. MESA, which is associated with the University of Arizona, serves as an umbrella organization for institutions and educators from around the world that study the Middle East, while NAFSA works to offer schools and students more opportunities arrange study abroad initiatives and strengthen ties between internationally-oriented schools.

Mimi Jeha, who is the director of the university’s summer Arabic program, has represented the university at MESA for several years, and will be making another appearance later this year. To help her make the show a success, she relies on Ed Shiner, the alumni programs manager who also has experience arranging conventions, in the New York office, to help her prepare their booth for the audience. 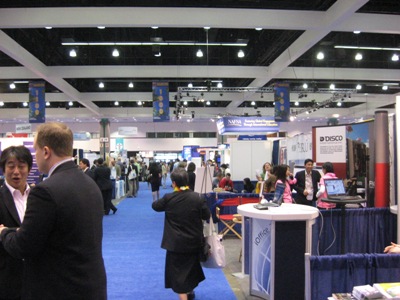 The NAFSA conference floor in May 2009.

LAU made its first appearance at NAFSA’s Los Angeles conference in May, and will be making a return visit to the next conference thanks to Elise Salem, Vice President for Student Development and Enrollment Management. But it wouldn’t have come together without the help of the advancement team in the United States, who provided advice and logistical support to help the university make its first appearance. The team in New York, which included Marge Pfleiderer, the director of operations, and David Pengel, one of the office’s development associates, who helped secure the meeting space and helped operate LAU’s booth on the show floor. The booth’s materials were provided with the help of the Marketing and Communications team in Lebanon, which offered banners to showcase the university.

Dr. Salem has spoken highly of the collaboration that made the event a success, saying “it’s been a total pleasure working with every member of the New York office on this and a number of matters, including alumni relations, development issues, PR, and, increasingly, SINARC [the intensive summer Arabic program].” Joanna Helou, one of the New York office’s newest additions, will also make the trip to this year’s MESA show, as part of the continued collaboration between the advancement team and the university’s talented faculty.