Graeme Bannerman is LAU’s political liaison in the United States, and discusses the university’s priorities and the state of education abroad with power brokers in Washington, DC. As part of his role, Graeme works with the New York staff in preparing for and taking part in meetings with officials and legislators in Washington. Thanks to his help and expertise, Graeme has been able to help LAU’s top officials make their case to the movers and shakers of the American political system.

Before joining forces with LAU, Graeme earned two master’s degrees, and then earned a doctorate from the University of Wisconsin in 1975. Graeme has always been close to issues in the Middle East. Before joining forces with LAU, he has worked to analyze the Middle East, working as an analyst on the region for the U.S. State Department and as a staff director in the foreign relations committee of the U.S. Senate in the 1980’s. Since Graeme has worked so hard to help educational institutions like LAU, it makes sense that he would share his experience and expertise with those who are committed to educating themselves, teaching at institutions in America and Lebanon, including Georgetown and George Washington University.

In addition to his work helping the region and students, Graeme has also made a tremendous effort to spread and monitor democracy throughout the world. During his long career, he has traveled the world to monitor elections in fledgling democracies, in the Middle East and in Eastern Europe, including the West Bank, Gaza and Georgia. 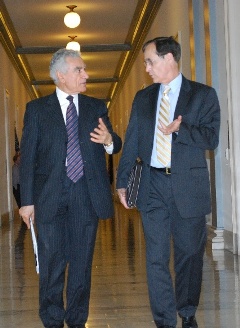 Marc Abizeid has gone to a lot of places before joining LAU as a full-time writer. Marc was born in Louisiana, and was raised there and in California by his Lebanese parents. He went on to study history and politics at the University of California in Santa Cruz. Marc also gained experience in American politics before coming to Lebanon, working on Ralph Nader’s campaign for president after graduating in 2008. As part of his involvement, Marc dealt with the press, conducted research and wrote for the campaign.

Marc honed those skills to join LAU in the summer of 2009, and works on news stories for the website and for LAU Magazine, as well as helping with publications like the upcoming President’s Report.

Paula Place joined the New York office as Assistant Director of Development, with primary responsibilities in the areas of prospect research, grant writing and the annual fund. Before joining LAU, Paula worked in development for the past ten years, most recently with The Music Hall, a nonprofit performing arts center in Portsmouth, New Hampshire. During her time at the Hall, Paula managed the annual fund and membership program.

In addition to her background in development for the performing arts, Paula also has been a member of New England’s artistic community for over 20 years. Paula earned a Bachelor of Fine Arts degree from The Art Institute of Boston and a Master of Science in Arts Administration degree from Boston University. Paula now resides in New York City and is a founding member of New Theatre Works, LLC which was formed in 2008 to produce new musicals and plays. 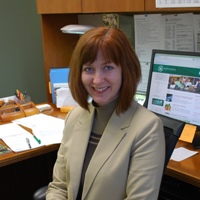