As we move further into 2010, LAU has made great progress in developing its alumni network. While LAU has convinced more alumni to join or start chapters all over the world, the work remains challenging for people who are intent on starting new groups. 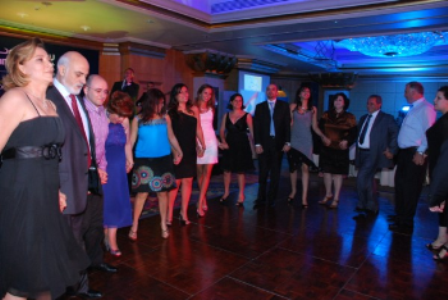 Members of the Oman chapter celebrate at a gala event

New chapters can be formed only once there is enough interest in forming one in one region or city. Those who are interested need to commit to organizing a committee, holding elections and planning events, and can submit a petition to the university to form the chapter. Once the chapter is accepted, which usually would happen within two months of sending the petition, a new chapter also falls under the guidance of the Alumni Association Board, the governing body of chapters and alumni throughout the world.

Chapters like the group in Toronto serve as strong examples of how the process works. The Toronto chapter is one of the older and more successful groups in the LAU alumni community in North America.

The members of the Oman chapter have gone through this process in recent years to become a successful new group. LAU’s alumni staff met forty interested alumni in 2006 to gauge their interest in participating. Once enough of them voiced their support, elections were held in 2007, which gave the chapter the leadership that remains today. Oman’s alumni got to work on holding events, holding balls and iftar celebrations. The chapter has also been successful in raising money for its alma mater, sending over $30,000 so far this year to support the university.
Carla Khalil and Hilda Ashkar, the president and vice president of the chapter, also noted one of the most common challenges to forming a chapter. “One of the obstacles was getting dynamic people to join the chapter. The work load and timing to prepare for an event is heavy considering the small number of active members, especially that all of us are full time employees.”Most of LAU’s alumni work full-time in various professions, and the need to work can make finding enough people able to organize a chapter a challenge.